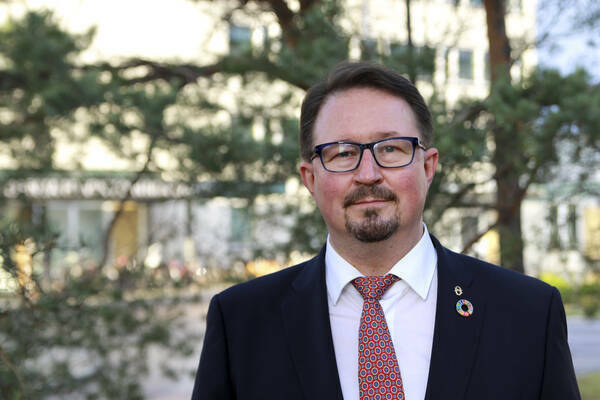 The Helsinki University Alumni Association has chosen Mika Salminen, the Director of Health Security at the Finnish Institute for Health and Welfare (Terveyden ja hyvinvoinnin laitos, THL), as Alumnus of the Year 2021. The Alumnus of the Year is a positive ambassador for the University of Helsinki. A person who has, with their activities, provided support to the principles of the University of Helsinki and to the appreciation of academic education and boosted the academic spirit of Helsinki is annually chosen for the task.

As the Alumnus of the Year, Salminen intends to speak at least about the importance of observing the impact of restrictions on the society as a whole in the midst of the corona pandemic.

– The sense of proportion is easily lost in the middle of a crisis. Some of the elderly take the warnings so literally that they do not go out at all. That’s when their condition will collapse and become dangerously weak.

A virologist who turned to reducing risks to public health

Born in 1965, Salminen started studying microbiology at the Faculty of Science of the University of Helsinki in 1984 and widely studied biochemistry and genetics as minor subjects.

In the final stage of his studies, Salminen turned to virology. In his master’s thesis completed in 1990, he discovered new subtypes of the HI virus in cooperation with Finnish-Swedish-Ethiopian and Finnish-Russian-Baltic researcher teams.

Salminen defended his doctoral thesis in 1994. The subject of his compilation-based English-language thesis was the identification of genetic subtypes of the HIV-1 virus.

In 1996, Salminen studied the HIV epidemics spreading among drug users in the territory of the former Soviet Union. A visit to Kaliningrad, where the social situation had become thoroughly miserable, was an eye-opener.

– That opened my eyes. Everything is not just biology. The circumstances that people have experienced have an impact on what crises they encountered. That’s when work on public health started to interest me.

In the late 1990s, Salminen worked as Head of HIV unit at the National Public Health Institute (Kansanterveyslaitos, KTL), the precursor of the present-day THL. At the time, he was introducing, with many others, the harm reduction approach to dealing with the drug problem in Finland. The aim was not to stop drug use altogether but to reduce the harm it caused.

Instead of punishments, narcomaniacs were given clean needles, methadone replacement treatment, counselling, food, and an opportunity to wash laundry.

“One does not have to take every criticism personally”

Salminen became a national celebrity in March this year because, as Director of the Department for Health Security at THL, he was tasked with explaining at press conferences why the spreading of the coronavirus was fought the way it was.

At the same time, it seemed in social media that there were thousands of rivalling virologists and epidemiologists in Finland who challenged Salminen as to how the crisis was really to be dealt with.

– At first, it caused some anxiety. Then one learned to live with it. One does not have to take every quip and every criticism personally, Salminen says.

– I try to present things as well as possible given the information available. You cannot go totally wrong like that, and if you do, you must allow that for yourself as well. Mistakes cannot be avoided in a long crisis and must be learned from.

Salminen points out that it is easy to come up with all sorts of outside suggestions and trial balloons but an authority must consider how to implement measures and execute orders in practice and envisage all of their possible consequences.

* Mika Salminen was born in Helsinki in February 1965
* Adjunct Professor of Virology, University of Helsinki
* Director of the Department of Health Security, Finnish Institute of Health and Welfare (THL)
* In charge of official corona crisis information
* Began studying microbiology at the University of Helsinki in the autumn of 1984
* Defended his English-language compilation PhD thesis on the genetic subtypes of the HIV-1 virus in 1994
* Worked in 1994–1996 as a civilian post-doc researcher at the Walter Reed Army Institute of Research and developed methods that for the first time enabled easy cloning of an entire HI virus with the help of PCR.
* Worked in 2009–2012 in Stockholm at the European Centre for Disease Prevention and Control (ECDC) as head of department in charge of blood-borne sexual diseases among other things. During the swine influenza pandemic, he worked as a crisis leader.
* Is an amateur photographer.

ALUMNUS OF THE YEAR -LECTURE 2021
Mika Salminen: What if science had not found microorganisms?
April 22 2021 at 17.00
Location: Livestreem from Tiedekulma