LIFELONG LEARNING AND INFORMATION FOR STUDENTS

Thursday 15.3.2018 at 18:00 Event on Lifelong Learning. Venue: Permanent Representation of Finland
Please register for the event with the link below.

Friday 16.3.2018 at 13.45-15.20 Information session at the European School (EEB2) for 5th to 7th graders on the opportunities to study at Helsinki University, the latest curricular changes and admission requirements. No registration needed.

If you would like to know more about the club or events don’t hesitate to get in touch with the chairman of the EU Alumni Club board Saara Harjula, saara.harjula@helsinki.fi

Over 60 alumni and friends attended.

The CEO of the University of Helsinki Alumni Association Pia Österman presented the ways that alumni can engage locally giving examples from Beijing and Stockholm. After the presentation a meeting was held at 17.30 where the participants formally decided on founding the EU Alumni Club, decided on the bylaws, and elected a Board of seven people for the Club to guarantee its future success.

After official pictures of the board had been taking the participants mingled talking about their affiliation to the University of Helsinki and shared memories and stories about their experience and career.

At 18.30 the Helsinki Challenge Team joined the event.

Mark Ferguson, Member of EU High level group on Maximising the Impact of EU Research and Innovation Programmes/ Director General, Science Foundation Ireland spoke about New ways of impact – innovation as the only way to sustainable growth. 7 teams pitched about their solutions to xx problems and all the team members stayed at the event and mingled with the EU Alumni Club members.

3.5.2019 Luncheon event: Interaction between Science and You

Interaction between Science and You: Science serving the public interest & Citizen Science

A large portion of research is publicly funded in most countries around the world. This means that the tax-payers are supporting research: they are key stakeholders. The public is, almost without exception, benefitting from research outcomes. And more importantly, the public is interested in what’s going on in the laboratories, on field work expeditions and in researchers’ offices.

People’s interest towards scientific research is reflected also in the increased participation in citizen science. Whether we are talking about being better informed about science, participating in the scientific process itself by observing, gathering or processing data – citizens can play a major role in advancing science within society. There are already many successful examples of citizen science like Lake and Sea wiki, SuALT web- based service for archeological findings, Baltic App for Baltic Sea environmental observations etc.

The purpose of scientific research is to produce new information for the society’s use, but for the time being, a great deal of research data is difficult to reach by the greater audience. The aim of this event is to learn more on how the European Commission, the Universities and NGO’s make research results accessible to society at large, support the public’s engagement in scientific research and create novel ways to enhance interaction between science and society.

12:30 -13:15 Lunch and video address of Rector Jari Niemelä/University of Helsinki 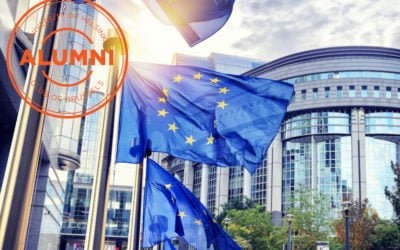 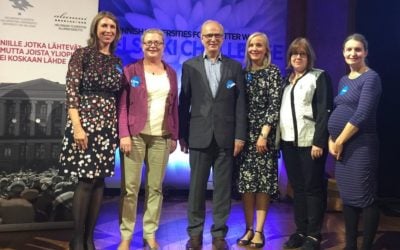 Mission and goals for the EU Alumni Club

The EU Alumni Club, based in Brussels, aims to bring together the alumni of the University of Helsinki who All alumni can join the club.

The mission of the EU Alumni Club is to create a lifelong and worldwide community of alumni through increased opportunities for meaningful engagement, in other words – Stay Connected, Continue Learning and Support Helsinki University

How can You join?

You can easily join the EU Alumni Club either online or by sending an email to saara.harjula@helsinki.eu
Don’t forget to follow us on social media and on our website to find out more about our upcoming events